History doesn’t repeat itself, but it often rhymes.

According to many respected news publications, 2022 is projected to deliver generally lackluster stock market performance relative to the historically strong performance of 2021. It would appear downbeat factors are plentiful—take your pick:

There is, ostensibly, a lot to worry about for investors in 2022. Yet, the current array of concerns certainly seems like more of the same.

Let’s reminisce on forecasts of rising rates in the not-so-distant past.

In early 2014, U.S. Federal Reserve Chairwoman Janet Yellen announced the pullback of massive monetary stimulus, following through on her predecessor Ben Bernanke’s promise in early 2013. The anticipation of monetary tapering caused so much emotional distress among market forecasters, that they were described as having a “taper tantrum.” Furthermore, in December of the following year, the Fed raised the federal funds target rate from 0% to 0.25%, and Ms. Yellen pointed to further “gradual increases” to come. Sure enough, the Fed again increased rates in December of 2016.

This material change in policy was widely forecasted to raise long-term rates and pressure equity markets—neither of which happened. At least, not yet. Since 2014, both real and nominal U.S. long-term rates are meaningfully lower, while U.S. and Global equity markets have in aggregate more than doubled in value.

Result? Long-term equity investors have been rewarded by staying put. 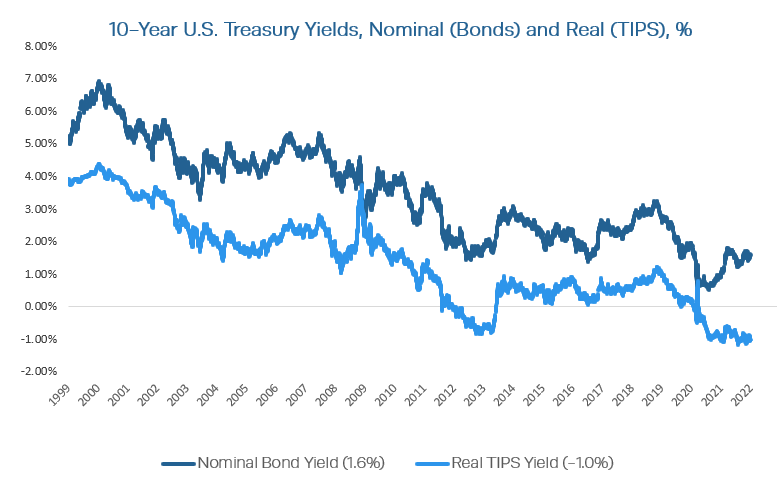 The central bankers’ guidance for higher rates, back in 2014 and now, seems to be a decent, educated guess. Yet, unexpected things do happen—hello COVID-19—necessitating changes in policy and strategy and, in the case of the pandemic environment, further monetary accommodations. So, rates going up is a generally accepted prediction, not a certainty. Also, while changes in short-term rates affect the borrowing costs of companies and individuals, what matters for investors is long-term interest rates as a driver of the cost of capital.

Real rates, i.e., nominal rates adjusted for inflation, are broadly negative across the U.S., Canada, Europe, and most of Asia Pacific countries these days, using as a proxy 10-year government bond yields adjusted for inflation. In other words, at current levels, investors who are buying U.S. Treasuries now are essentially expected to earn negative -1% real yield annually on their invested capital. While the difference in real and nominal rates might not have seemed like much historically in developed countries, the gap is becoming more pressing amid surging inflation.

Russia poised to invade Ukraine, keeping Europe and U.S. on high alert! Sound familiar? That was significant news in 2014 as well, when Russia annexed the Crimean Peninsula.

See also: Tensions in U.S.-China relations, and, not to mention tensions in the Middle East—2014 meet 2022.

Turkey in disarray! That theme also dominated the news in 2014, when mass anti-government demonstrations were teargassed by said government. These days, Turkish police continue to try to quell discontented demonstrators while the Turkish government is trying to tame rapid inflation and currency devaluation.

China’s growth is slowing—you can probably guess it by now—was also a headline in 2014, when The Wall Street Journal proclaimed: “China's economic growth slowed to 7.4% in 2014, downshifting to a level not seen in a quarter-century and firmly marking the end of a high-growth heyday that buoyed global demand for everything from iron ore to designer handbags.” Despite that gloomy forecast, both iron ore and Louis Vuitton bags cost more today than when the WSJ article was published.

We keep abreast of the macroeconomic issues of the day to maintain situational awareness. Yet, history has also shown that the future is predictably unpredictable, and it is helpful to consider potential secondary and tertiary consequences to manage risk.

A lot of mainstream media articles tend to be yesterday’s news, in my opinion. What seems to matter is determining what could be the potential outcomes of those events. For example, rising rates and commodities prices tend to put significant pressure on consumers in non-developed markets, often resulting in public demonstrations and occasional political regime changes. This was broadly the case during early to mid-2010s, including the Arab Spring, and in Kazakhstan and Turkey currently.

When expecting potential calamities, it helps to consider potential offsets, too. For example, to offset prospects of rising global interest rates driven by the U.S. policy shift, Chinese policymakers activated their own monetary tools to support their economy back in the mid-2010s and more recently in the second half of 2021. The European Union and Japan’s policymakers have also signaled that they are prioritizing economic growth over inflation for now, and they are not in as much of a rush as the U.S. policymakers to raise rates. So, for now, the EU and Japanese monetary support, which is substantial in the global context, will likely remain in place.

In a complex adaptive system such as the global economy, there are multiple factors at work. Rising rates tend to put pressure on economic activity and asset prices. Yet, for context, in 1994, the U.S. 10-year Treasuries yield increased to about 7% from about 6% a year earlier. Still, that did not prevent the roaring bull market in U.S. equities during the 1990s because there were many other factors at play.

Even though equities are generally considered to be more expensive today than they were in the past, in the environment of low to negative real rates, equities, when prudently selected, continue to offer attractive long-term value for patient investors. And there are few better investment alternatives to equities available for long-term investors.

So, in periods of heightened uncertainty, it is essential to continue to focus on the things we can control. For me, as a global long-term investor, it means building a resilient portfolio by prudently selecting companies, which:

By diligently following our investment process, we seek to build resilient portfolios so that we can deliver attractive risk-adjusted returns for our clients irrespective of how the future actually unfolds.

This blog and its contents are for informational purposes only. Information relating to investment approaches or individual investments should not be construed as advice or endorsement. Any views expressed in this blog were prepared based upon the information available at the time and are subject to change. All information is subject to possible correction. In no event shall Mawer Investment Management Ltd. be liable for any damages arising out of, or in any way connected with, the use or inability to use this blog appropriately.