In his book The Emotional Machine, the late Marvin Minsky coined the term ‘suitcase word’ to describe words into which people attribute—or pack—multiple meanings. Minsky was a pioneer in the research of artificial intelligence, co-founder of MIT’s artificial intelligence lab, and recipient of the prestigious Turing Award for his outstanding contributions to the field of computing. His observation was that many of the words commonly used to describe the human mind—such as consciousness, intuition, intelligence, or learning—were suitcase words whose embedded intricacies presented a real challenge when attempting to apply experimental and computational science to a system as complex as the human brain.

Suitcase words can become hazardous when we assume that everyone else attributes the same meaning. For example, to some, the term “social justice” might imply a need for more social welfare programs and a more progressive tax code; but for others, the term may imply the exact opposite!

Suitcase words abound in investing: e.g., risk, value, and quality (to name a few). In the current market environment, however, with valuations across equity markets well-above their long-term averages and nine years into the current bull market, one worth unpacking is the concept of defensiveness. Ask a sample of investors what the term defensive means when describing a company or investment and you are likely to get many different answers—none of which are mutually exclusive:

Many also apply the term defensive to entire sectors. Stocks in the consumer staples, telecom, health care, and utilities sectors have often been cited as defensive in nature—broadly referring to their relative stability during periods of market turbulence. This has generally been an apt description over the past 50 years, with the consumer staples sector in the U.S. having outperformed during every recessionary phase. 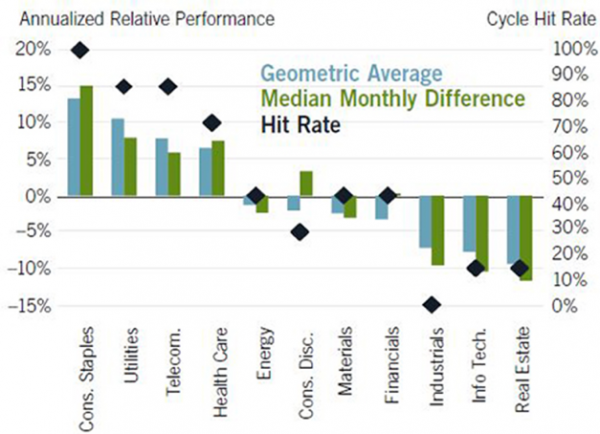 Source: Fidelity Investments  as of Sep. 30, 2016. Includes equity market returns since 1962. Returns are represented by the top 3000 U.S. stocks ranked by market capitalization. Sectors as defined by GICS.

Unpacking the suitcase: a framework for thinking about defensiveness

Given how often “defensive” enters into the investing lexicon and that it can mean different things to different people, aiming for a greater degree of precision in its definition may help to reduce misunderstanding or generalized historical bias.

As fundamental, bottom-up investors, we start by looking at companies on a case-by-case basis: what are the characteristics of its business model, the industry in which it competes, and are management capable operators and stewards of capital? From this process, a defensive business, in our view, is one in which the cash flows generated by a company are highly recurring and durable. Customer stickiness, pricing power, strong barriers to capacity expansion, and low exposure to cyclical end-customers, are all factors that might contribute to the defensiveness of a company’s business model.

Another crucial element is that we view risk as the permanent impairment of capital, not the volatility of a company’s stock price. In short, risk is capital decreasing so much in value that the probability of recovering it over the long-term is very low. Therefore, investments for which either the probability or extent to which capital might be impaired are low, may be considered more defensive.

Over the past year, we eliminated a number of companies from our portfolios in the traditionally viewed defensive consumer staples sector, largely because we developed doubts about the resilience of their future cash flows.

Three examples are Nestlé, Reckitt Benckiser, and Unilever, whose brands include household names such as Nespresso, Stouffer’s, Dettol, Lysol, Dove, and Lipton. We believe all three companies are facing rising competition in their respective markets, largely due to a tectonic lowering of barriers to distribution given the ability for smaller, low-cost competitors to now get shelf-space (e.g., through Amazon). This means that these companies may no longer depend as heavily on the value of their brands to produce sales, and especially at the premium pricing they might have been accustomed to commanding. In other words, customers are switching to cheaper alternatives and these companies are losing pricing power, which is problematic in an environment of rising costs.

Furthermore, in our view, valuations for all three companies were not pricing in these risks appropriately. At the end of 2007, before the global financial crisis, Nestlé traded at a trailing price-to-earnings multiple of 14x. At the end of 2017, this multiple stood at 35x. A lofty valuation coupled with what we perceive to be deteriorating business fundamentals meant that the balance of probabilities had shifted, and capital impairment was deemed a greater concern—even for a business that had historically exhibited defensive traits.

The three examples aren’t alone: many consumer staples companies are currently facing similar challenges. The sector has underperformed lately as heightened volatility has returned to the market, upending the generally held expectation that they should do better in precisely such an environment. The lesson for investors is that applying a suitcase word like defensive to an entire sector can be dangerous. Competitive dynamics can change; in the Amazon era, as in any era of change, old assumptions may no longer apply.

So what might a defensive stock look like in the current environment, at least according to our interpretation?

Before attempting to answer that question, we should acknowledge two related points. First—and to re-iterate—there is a difference between a defensive company and a defensive stock. Very good companies can make poor investments if purchased at a price far above their intrinsic values.

Second, in the current market environment, it is very difficult to find truly defensive stocks. Those companies with recurring and durable revenues often trade at expensive valuations, while those more cheaply valued stocks that may appear to have a greater margin of safety are usually cheap for a reason: their cash flows may be uncertain.

A possible example of a defensive stock is Wolters Kluwer, a professional publisher based in the Netherlands. The company provides critical reference information and tools to various professionals: software for tax preparation, software to provide doctors with recommendations at point-of-care, and reference material such as legal, tax, and medical journals. The importance of the information and services they provide to their customers—and the need for that information to constantly be refreshed—means that the majority of revenues are recurring in nature. Management is also transforming their less defensive and declining print exposure to digital offerings through organic product development and acquisitions. Estimated retention rates for their digital products are above 90%.

Finally, our valuation work has led us to conclude that the probability of permanent impairment of capital may be lower—though certainly not absent!—for Wolters Kluwer, especially when compared to some of those consumer staples companies that we had eliminated.

In defense of the suitcase

Of course, a case can be made that all words in the English language are suitcase words—after all, we are approaching the 20th anniversary of President Bill Clinton’s: “It depends on what the meaning of the word ‘is’ is.” To paraphrase Marvin Minsky, the concept of a word’s meaning isn’t simple, and quite often the ambiguities and our various interpretations are precisely what make language and the human experience so rich.

In the world of investing, there are very few facts: no business or stock is inexorably or entirely defensive. But in making this statement, there’s an assumption that others will interpret the concept of defensiveness as we do. Suitcase words shouldn’t be avoided simply because they contain multiple meanings: quite the opposite! Their many facets foster the most thought-provoking and open debates here at Mawer. But in order to ensure we’re speaking a common language, we strive to use as much data as possible, embrace a candid culture where opinions and dissenting views are encouraged, and make sure we have a cognitively diverse team that is always searching for alternate interpretations. These actions help us arrive at some form of clarity when the suitcase needs to be unpacked.

This blog and its contents are for informational purposes only. Information relating to investment approaches or individual investments should not be construed as advice or endorsement. Any views expressed in this blog were prepared based upon the information available at the time and are subject to change. All information is subject to possible correction. In no event shall Mawer Investment Management Ltd. be liable for any damages arising out of, or in any way connected with, the use or inability to use this blog appropriately.