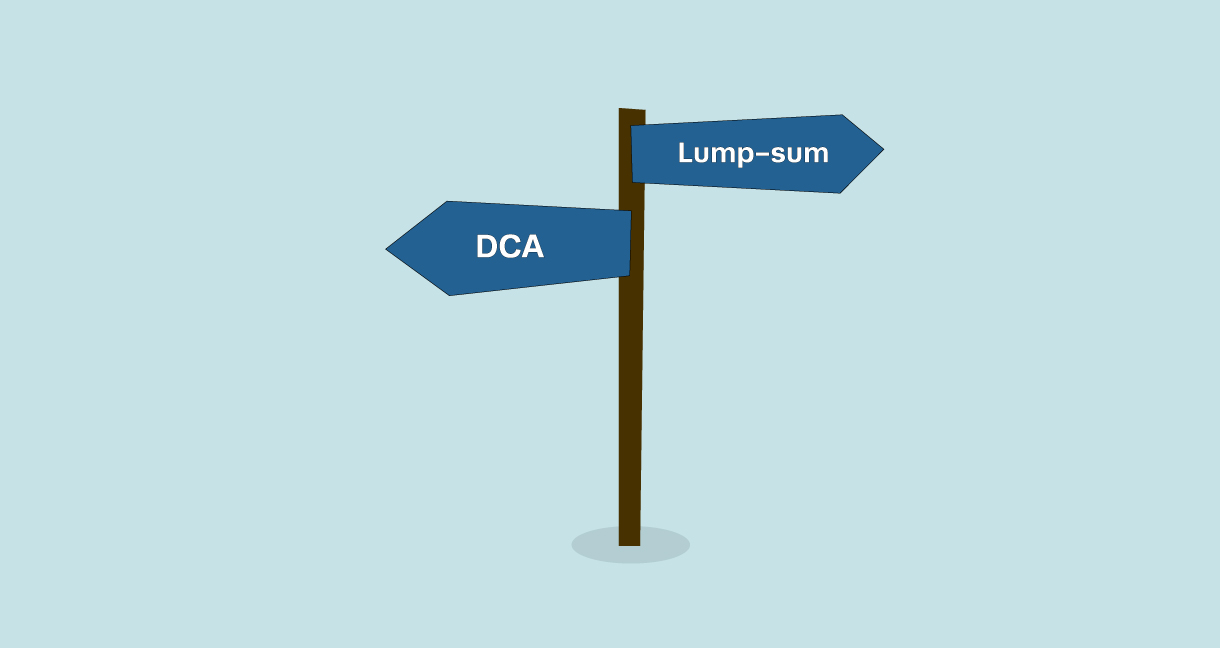 Here are some arguments for and against both tactics.

There may come a time in your life where you find yourself receiving a cheque for a large sum of money. Maybe you sold a property when real estate prices were high, sold your business, or received a year-end bonus and now have cash to invest. The question then becomes: how should you put that money to work? Invest it all at once, or in regular instalments—the latter of which is known as dollar-cost averaging (DCA)?

There are pros and cons to each method, and there’s no right or wrong answer. What you choose to do will depend on a variety of factors, including your risk tolerance, time horizon, and the objective of the account receiving the lump sum or regular installments, and more.

It’s always a good idea to speak to a financial advisor before putting any sizable sums into the market. Here’s a look at each investment method.

It was nearly 73 years ago that dollar-cost averaging became part of the financial lexicon, when legendary economist Benjamin Graham discussed it in his book The Intelligent Investor. While much of the investing world has changed since that time, DCA has stayed largely the same. As Graham wrote: “The practitioner invests in common stocks the same number of dollars each month or each quarter. In this way, he buys more shares when the market is low than when it is high, and he is likely to end up with a satisfactory overall price for all his holdings.”

In other words, if you stagger contributions in monthly or biweekly increments, you don’t expose an entire large lump-sum contribution to a potentially sharp market drop, which could leave you with a hole to climb out of right off the bat. It’s called dollar-cost averaging because the dollar cost of each instalment is the same—say, $1,000 every two weeks—so you’ll end up purchasing more stocks, bonds, or fund units when prices are low and less when they’re high.

DCA may make sense for people who could be significantly impacted by a market downturn, such as retirees who rely on their investments for income; individuals who struggle with the fear and anxiety that can come with investing all at once; or for investors who may need to tap into their savings sooner than later. It’s also a good strategy for investors who need to start forming good savings habits. DCA can help investors prioritize saving by automatically moving money from their bank account into an investment account on payday before they get the chance to spend it on perhaps more frivolous things. Remember, however, not to drag out your DCA strategy for too long—the whole idea, after all, is to get your funds invested in the market.

It’s natural for people to want to put all of their money into their investments as soon as they receive a lump sum of cash. Who wants to keep that much money burning a hole in their pocket and why not put your money to work right away?

There is evidence to suggest that investing those funds immediately pays off in the long run. In 2020, Nick Maggiulli, Ritholtz Wealth Management’s chief operating officer, compared the performance of investing in the S&P 500 Index using a lump sum versus 24 consecutive monthly DCA contributions. Going back to 1997, he discovered that lump-sum investing produced higher returns 78% of the time with an average market outperformance of 5%. He found similar results using other markets and asset classes.

This makes sense in that historically, equity markets have tended to rise more than they fell, and so the risk of missing out on income and capital gains by holding back some of your capital is, on balance, greater than that of taking a lump-sum loss. The challenge, though, is as the saying goes: past performance is not indicative of future results. Just because the market has risen doesn’t mean it will forever. If, for instance, you had put your lump sum in the market on February 21, 2020, just before COVID-19 lockdowns began, you would have lost 35% within a month. (Markets have recovered, but those few weeks would have no doubt been difficult to stomach.)

Lump-sum investing can work for those who have a long time-horizon or a lot of savings. Those investors can then either take the time needed to recover from a loss or can more easily handle a decline from a psychological perspective. Still, some investors will never sleep well after investing a large lump sum all at once.

At a glance: The pros and cons of DCA vs. lump-sum investing

Ultimately, personal circumstance is the most important determinant of whether you go the lump sum or DCA route. The investor with an already substantial retirement account will have less reason to be anxious about a smaller additional cash infusion than someone just getting started, or who may need to start drawing from the account to supplement their retirement income, for example.

Also ask yourself how long you’ll need before you start drawing money out of your nest egg. If it’s more than 20 years, you may want to get the cash invested and working for you right away. If you need the money in five years—a time frame in which a big market crash could impact a portfolio—then DCA could be the way to go.

Finally, what’s your tolerance for risk? If you sweat every time you see a market decline, then you won’t see as big of a drop if you invest a bit of it every month over time. If you’re OK with major corrections of, say, 20% or more, seeing your lump sum fall by thousands in the first few months in the market won’t matter.

Whatever option you choose, the good news is that you’re investing that money in the market either way. Spend it all at once instead, and those funds won’t grow at all.